Patrik Svensson is a scholar, writer, curator and entrepreneur. He was Visiting Professor of Digital Humanities at UCLA 2016-2020, Distinguished Visiting Fellow/Visiting Professor at CUNY Graduate Center 2015-2016, and Professor of Humanities and Information Technology at Umeå University 2012-2020.. Svensson is the former Director of HUMlab (2000-2014). He will be a fellow at the Swedish Collegium for Advanced Studies in the Spring Semester of 2022.

His current work is on conditions of knowledge production, critical design, digital humanities, and mobilizing humane/humanistic competence and knowledge to collaboratively respond to societal challenges and complex problems. As a practitioner and leader, he is committed to building value-driven, generous, sharp and deeply collaborative institutions and platforms. 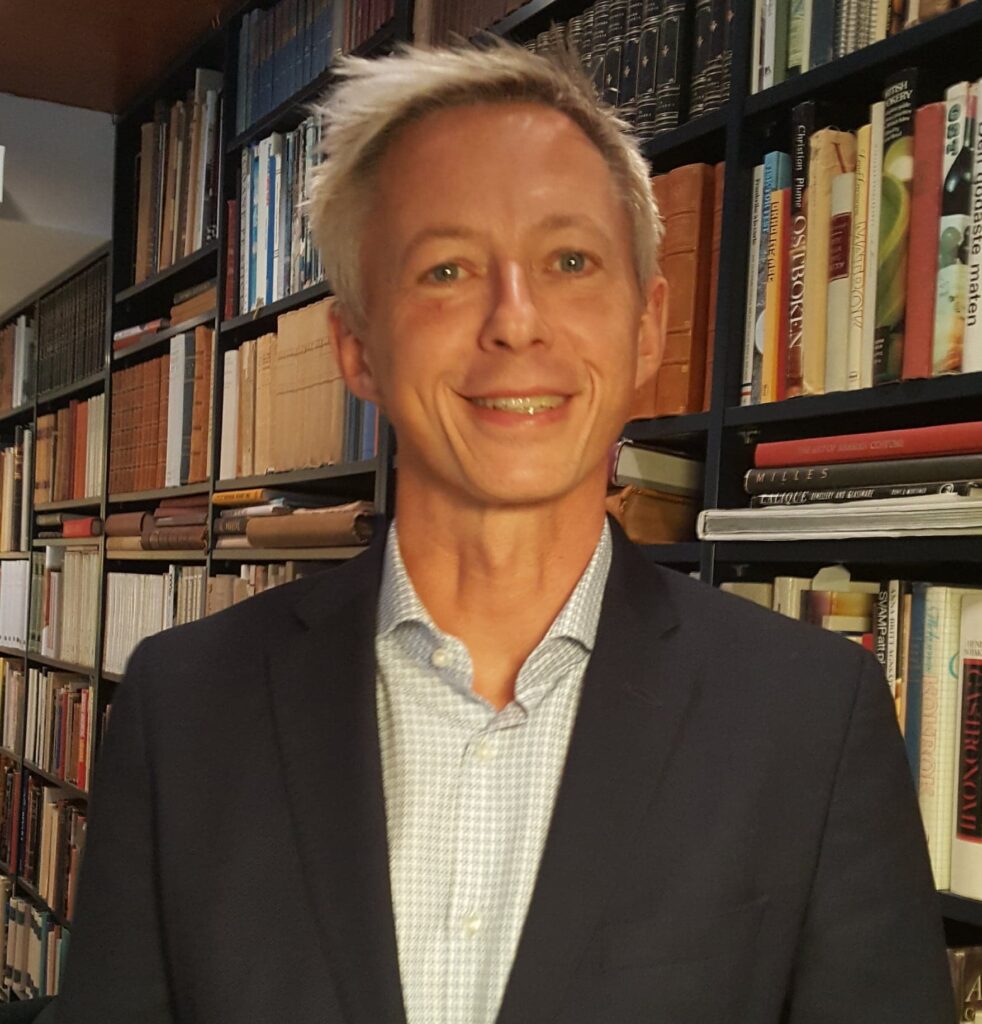 Patrik Svensson’s academic background is in linguistics, language learning, philology and corpus methodology. His Ph.D. work was on nominal number. He finished his Ph.D. in 1998 after having spent a year as a visiting scholar at UC Berkeley 1996-1997. He published a textbook on the Gothic language (the first one in Sweden in 150 years) together with Torbjörn Nilsson in 1998. Svensson was successful in getting a senior lectureship in English linguistics in 1998. A few years later, he was offered a postdoctoral fellowship from Stint (a year at UC San Diego) and at the same time as he was asked to become the director of HUMlab. He chose HUMlab and a less disciplinary pathway, but continued to work on language education and technology. This particular line of work has so far resulted in two books (2006, 2008), three articles/chapters, a number of finished projects, national network building and a strong engagement in learning more broadly.

Between 2000 and 2014, much of Svensson’s time was devoted to building, establishing and expanding HUMlab at Umeå University. HUMlab was conceived as an open meeting place for the humanities, culture and information technology. From a small operation of two people and one empty space, HUMlab came to employ about 25 people and encompass two large labs on different campuses, more than 10 externally funded projects and large international footprint (at the time of Svensson stepping down). Svensson led the development and establishment of a complex, multi-site infrastructure including several high-end visualization and interaction environments (including a back projected floor screen and an 11-screen visualization and performance space). He was also instrumental in getting resources and implementing several programs, including an international postdoctoral program and a series of keystone conferences.

This development was made possible through strong support from Umeå University and a number of funding agencies (including the Kempe Foundation, the Wallenberg Foundation, Riksbankens Jubileumsfond and the Baltic Foundation). HUMlab came true through a very strong group of collaborators employed in HUMlab and through an extensive and strongly engaged international network. Svensson’s job was partly to curate an intellectual direction and events and to build networks and new projects. He also initiated and supported industry collaboration, both with large corporations and the growing digital media and cultural industries scene in the North of Sweden. Importantly, HUMlab is a learning environment and his work has involved frequent work with students and colleagues to support learning, exploration and taking risks. He has also been strongly engaged in building the spaces and infrastructure, articulating the overall vision and ideas through the way space, technology and people come together.

Work on ‘Humanities and the Digital’ remains one main strand of Svensson’s current work. The other main (and related) strand is ‘Conditions for Knowledge Production’, and this theme includes work on research infrastructure, spaces for learning and knowledge production, intellectual middleware (with Johanna Drucker), presentation software (with Erica Robles-Anderson) and academic events. Such work includes the December 2014 HUMlab conference on “Genres of Scholarly Knowledge Production” (see here for the post-curatorial statement), a piece on Close Reading PowerPoint and a chapter on “The Humanistiscope—Exploring the Situatedness of Humanities Infrastructure” (in the aforementioned volume Between Humanities and the Digital). Several of Svensson’s projects relate to this research theme, including the research program Media Places (together with Stanford University, funded by the Wallenberg Foundation 2011-2016, see here for a HUMlab article about the collaboration). In 2016, Svensson published “The Why and How of Middleware” with Johanna Drucker (Digital Humanities Quarterly 2016.10.2) and “‘One Damn Slide After Another’: PowerPoint at Every Occasion for Speech” with Erica Robles-Anderson (Computational Culture, 2016, 5). The Computational Culture article received the The Mahoney Price for 2017.

Svensson spent the academic year of 2015-2016 at the Graduate Center, City University New York, New York City (with the Advanced Research Collaboratory and also the Futures Initiative). see here for a HASTAC interview from that time. From the fall of 2016 he was a Visiting Professor of Digital Humanities at UCLA (a multiple year appointment) as well as Professor of Humanities and Information Technology at Umeå University.

In the fall of 2017, Svensson organized a large workshop on data-driven research in the humanities together with Pelle Snickars at KTH Royal Institute of Technology, Stockholm. 2018-2019 he coordinated a large-scale initiative for considering the future of humanistic infrastructure, which among other things resulted in the report “Humanistisk Infrastruktur” (published by Riksbankens Jubileumsfond in 2019) and a series of events, including one with the Swedish Research Council, the Ministry, funding agencies, national and international scholars and others (October 18, 2018). Svensson also worked with the National Library of Sweden to start a strategic collaboration between the two institutions, including the initiative Digital Humanities Stockholm. The inaugural event took place at the National Library of Sweden on January 29, 2019.

Within KTH Royal Institute of Technology, he also took the initiative to start KTH Humanities Tech (in a prototype phase) to build long-term capacity for the humanities to respond to societal challenges and complex problems in relation to socio-technological systems. This work is the result of a long-standing collaboration with a group of scholars, activists and others.  The precursor to this development was a series of events on “making a difference” at University of London and UCLA as well as his leadership in HUMlab, trying to establish a generous and sharp space for challenging infrastructures and models of knowledge production.

Svensson’s work attempts to be critical and constructive at the same time. At CUNY and UCLA, he developed this interest into a more fully-blown, academic and societal program which was part of his contribution to the formation of ‘experimental humanities at UCLA’, as evidenced through the large-scale UCLA Experimental Workshop Humane Infrastructures, March 9-10, 2020. Svensson is under contract to finish a book on Humane Infrastructures by 2021. His envisioned longer institutional and scholarly trajectory is mobilizing humane and humansitic knowledge as a driving force or logic for change in deeply collaborative settings