I have contributed to more than ten externally funded projects (often as the PI) over the years. I see these projects as a way of imagining things and making them come true. For this reason I enjoy application writing.

While I enjoy project work, working with others (I have been fortunate to work with excellent people) and creating possibilities for others, I am also happy that my professional life has not been dictated by a project economy or having to have a long list of external projects. A fair share of my work is not linked to projects in this case. This said, projects are a key component in my portfolio and I am very happy about the collaboration, scholarship and opportunities they manifest. I keep looking out for new possibilities.

The below list of projects is not complete (work in progress). Also, I have not included infrastructural grants/projects in the list (I have managed a total of five such grants totaling about 3 million USD). Additionally, my professorial work (externally funded through my chair) is not listed below, but includes work (and what might be called projects) on academic events, space and knowledge production,  presentation culture/technology, humanities centers and the digital humanities.

Among ongoing projects are:

Media Places (web) is a large research program between Umeå University and Stanford University aiming to explore the intersection of media, infrastructure and place. There are some 20 scholars and experts part of the program and one central idea has been to employ junior scholars alongside the senior scholars (who are typically funded in other ways). The program is primarily divided into three parts: screenscapes, sites of knowledge production and media places as hybrid practice and representation. There is a combined focus on high-quality “traditional” scholarship and methodology development. HUMlab at Umeå University and Center for Spatial and Literary Analysis are the key nodes, and the program helps build a common intellectual and technological platform. Furthermore, the program extends beyond these centers into other centers, departments and individual scholars at the two universities. Recent results include Fred Turner’s book The Democratic Surround (University of Chicago Press, 2013), the edited volume Between Humanities and the Digital (MIT Press, 2015, with chapters by Jennie Olofsson, Zephyr Frank and Patrik Svensson) and a range of digital projects (see CESTA’s website for examples of projects and methodology developed). The project has also organized several large events around the theme of media, place and technology.

The project explores spaces for knowledge production with a particular emphasis on interactive and intersectional spaces. Digital humanists, architects and technology experts work together to think about how the intellectual middleware (the coming together of conceptual foundations/operational goals and material implementations) of institutional space can be described and analyzed, and how we can use sensor technologies and other methodology to trace spatial patterns over time. The project includes several case studies in relation to institutional spaces at Umeå University, Stanford University and elsewhere.

The research program (web) approaches a media and screen rich world in terms of engaging with multiplicities of screen and their cultural, narrative and material context. Two central research questions are: 1) How can we understand screens, and in particular multiple screens, as material manifestations and representational enactments in different types of media places? and 2) What role do screens play in post-1980 notions of research infrastructure and how can multiple screens facilitate different types of knowledge production? The project has a strong material-intellectual emphasis and experimentation with different types of infrastructure and scholarly installations is important. The program has also resulted in a number of scholarly publications and events. A large project – Digital Bread and Circuses – within the framework program is led by Anna Foka. Cecilia Lindhé (now University of Gothenburg) has also played an important role in the program, and Molly Steenson (Carnegie Mellon University) has contributed importantly to the research and not least the summer project sessions.

Query and Context Based Visualization of Time-Spatial Cultural Dynamics 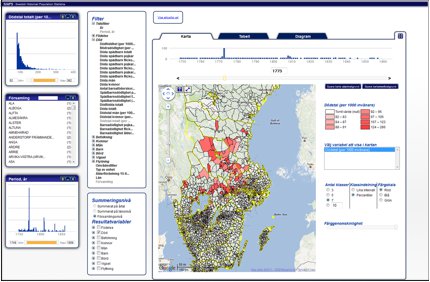 QVIZ (web), funded within the EU Sixth Framework program (IST), was started in order to bring users a single entry point to the archives of Europe – a common starting point that allows browsing of the archival resources through time and space using a dynamic map or contextual categories. The map interface locates the resources without the need of knowledge concerning the language that the resource keeps or which institution that holds the records. The system implements a powerful faceted browser. In addition to this, QVIZ also provides an environment for collaborative knowledge building with social bookmarking for interested users. The project was carried out with several national archives. The resulting framework has been employed successfully in several large externally funded projects (Fredrik Palm has played a key role in making this happen) including the Strategic Environmental Archaeology Database.

This program offered one-year (extendible to two years) scholarships for research and artistic practice in HUMlab (with an affiliation to a department and discipline). The program was very important to the further establishment of HUMlab in that it brought in about 20 excellent early career scholars and artists to Umeå University and created strong lasting networks. The fellows became part of the texture of HUMlab. My responsibilities were to organize calls, be involved in setting the intellectual direction of the program, spread information, manage the selection process (with a committee and a chair) and make sure the fellowship stays were successful (I was helped greatly by people in the lab including Emma Strömqvist, Emma Ewadotter, Richard Lainegard, Coppelie Cocq and Cecilia Lindhé, and HUMlab as a whole contributed to make the program a success). Fellows over the years include Jenna Ng (now York University), Erica Robles-Anderson (New York University), Paul Arthur (University of Western Sydney), Matt Ratto (University of Toronto), Ele Carpenter (Goldsmith) and Jan Van Looy (Ghent University).

Virtual Weddings and a Real Wedding of Linguistics, Cultural Studies and Literature

This project set out to bridge the gap between linguistics, cultural studies and literature within English as an academic discipline. This was done through working with rich themes (with critical and interdisciplinary potential) such as “creating realities”, “weddings”, “the city” and “monstrosity” and through the students creating sites in a graphical virtual environment which was linked to a set of rich hypertexts.  These online installations were the equivalent of B.A. thesis. The project report (2002) is available here. There is also a chapter on the project that was published in a volume edited by Uschi Felix (see publications). This project was one of the earliest ones in HUMlab and it contributed importantly to the lab. Many of the students continued to work with HUMlab in different capacities including Therese Örnberg Berglund, Jim Barrett and Stephanie Hendrick (all with digitally inflected Ph.D:s from Umeå University now).